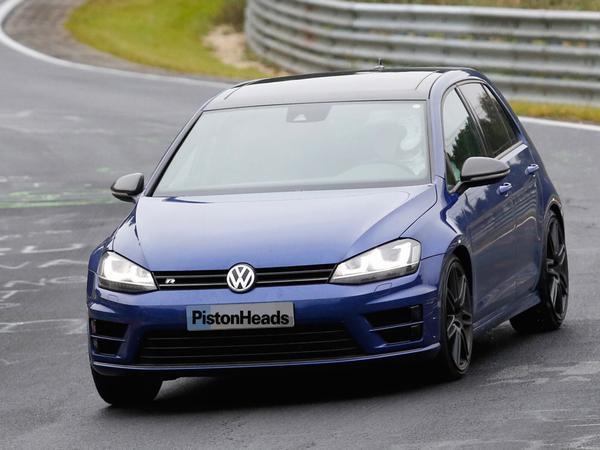 Remember the Golf R400 concept? Revealed at Beijing more than three years ago now, it promised a **** of a lot from the fast Golf formula. Like 200hp per litre, for a start. Nothing appeared to come from it, then there was that diesel issue, and now we're looking forward to VWs like the SEDRIC.

But what noise is coming from those exhausts?But what noise is coming from those exhausts?Or are we? These latest spy shots appear to show an even faster Golf R on the 'ring, now with a pair of chunky exhausts, a slightly tweaked rear spoiler and a set of wheels that appear to be borrowed from a B7 Audi RS4. Note as well some wavier front brake discs, rather like those on an Audi RS3 in fact.

Speaking of the RS3, our spy photographer suggests that this car is using a five-cylinder engine. Frustratingly there isn't a video to support this, though of course the last VW seen on the Nordschleife with these exhaust pipes was the 'Tiguan R' - which most definitely did have a five-cylinder engine. Could it be that VW is finally being given more access to that lovely 2.5-litre turbo? Or will the EA888 2.0-litre be boosted even further?

Go on VW, you know you want to...Go on VW, you know you want to...A 400hp Golf, ridiculous though it sounds, won't be short of rivals either. You can buy a Focus RS with a warrantied 375hp, a Mercedes A-Class with 381hp and the 400hp RS3, don't forget. Moreover, given how well the standard Golf R has been received, you'd think VW would be extremely eager to add to the range.
So, what do you think this might be? Could it be the first five-cylinder Golf since the old V5s? Or is VW duping us all, when the car is in fact a simple facelift? All thoughts welcome as always...
If you need Admin assistance please post here:
https://www.golfr400forum.com/forum/3...am-vs-support/
GolfR400Admin is offline
Quote Quick Reply